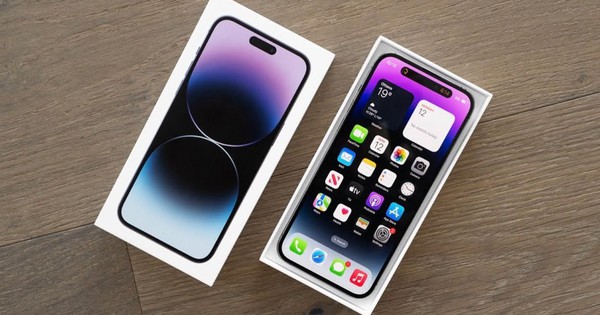 Although it has been open for sale for more than a month with the supply of goods constantly replenished, the iPhone 14 Pro Max is still in short supply in most distribution systems until now. The high demand for the Pro Max model makes it difficult for consumers to own the better iPhone model.

On November 16, iPhone distributors said they had received new shipments, especially iPhone 14 Pro Max in 128GB and 256GB colors and sizes. Although there is a large amount of additional goods to serve the market, on November 18, retail systems simultaneously announced an increase in the price of iPhone 14 Pro Max.

As the reporter noted, on November 18, the new iPhone 14 Pro Max model has a new price that is 1 million dong more than the previously listed price. Specifically, prior to November 18, all retail systems announced list prices for the 128GB and 256GB versions at VND 33.99 million and VND 36.99 million, respectively. However, since the time mentioned above, the listed price has increased to VND 34.99 million and VND 37.99 million, respectively. Notably, the price increase only applies to the higher-end iPhone model and 128GB/256GB version, the standard Pro model, the two cheaper models, and the high-memory model at the same price.

Indicating a major retail system, the iPhone 14 Pro Max is priced at 34.99 million VND for the 128GB version of all colors. A 256GB version is also listed at the same price, without changing the price by color. However, on some other systems, although the listed price has increased by 1 million VND compared to the previous one, only the purple version has the highest price, while the other colors are still reduced from 1 to 2 million VND compared to the previous price. In particular, another big system allowed the price of the Purple iPhone 14 Pro Max to be 2 to 4 million VND higher than the listed price depending on the version.

In Apple’s official distribution channel on e-commerce sites such as Shopee, Lazada and Tiki, the reporter has not yet recorded a new price increase for the iPhone 14 Pro Max model, but all three of these platforms are still in production. It is “unavailable”, or “out of stock”.

Speaking to reporters, an FPT Shop system representative said the new price only applies to customers who order the device from November 18th. For customers who made a deposit before the above time, the old rate will still be valid in accordance with the store’s regulations.

There are many reasons for the iPhone price increase

In addition to the severe shortage of goods due to Apple’s large iPhone assembly plant in Zhengzhou, China has reduced operational capacity due to COVID-19, one of the main reasons for the increase in iPhone selling prices in Vietnam comes from the exchange rate of the US dollar against VND. increased in recent years.

“This is unprecedented, due to fluctuations in the market such as customer demand, the dollar exchange rate, rising costs and disruption to the supply of commodities.”, represents the combined retail system. With the Federal Reserve (Fed) continuing to raise interest rates to a high level, coupled with the state bank also reducing the exchange rate adjustment margin to 5%, it is also expected that the market will face many difficulties in the near future. The exchange rate may continue to rise higher.

Previously, due to the impact of the US dollar exchange rate, many retail chains increased the prices of iPhone 11 to iPhone 13 models by 3-5%. Technology accessories have also seen prices rise by 5-8% depending on the item. The retail system representative above said that while Apple has raised prices for many items not just the iPhone, for Android phone products and electronic items in general, incentives and promotions may be available to save costs.