The Cube is the first officially Anker-certified MagSafe product, which means it supports full 15W wireless charging on compatible iPhone‌ models. It also supports Apple Watch fast charging on the Series 7, Series 8, and Ultra, which is a huge improvement over standard charging speeds. Combine these features with a charging surface for AirPods, and you’ll have all of your device’s charging needs covered to the highest possible specifications.

Anker also included some innovation on the design front with the 3-in-1 Cube, where everything collapses into a roughly 2.5-inch cube, great for a small nightstand or desk area and for portability. This is a huge improvement over some other options such as the Belkin 3-in-1 stand with fixed arms that makes it quite bulky for charging and everyday use, not to mention trying to travel with it.

At around 14.5 ounces, Anker’s Cube is fairly heavy, which hampers portability a bit if you’re looking to toss it in a suitcase, but this trade-off is essential to provide stability in balancing the phone sticking to the “MagSafe” charging surface. 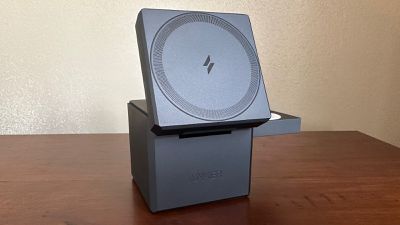 The MagSafe‌ phone charging surface on the Ankers Cube is a platform that mounts at the front, and swings with enough resistance that you can position it across a range of angles for maximum comfort while also revealing the AirPods charging surface underneath.

This is also the first third-party MagSafe‌ charger I’ve seen that doesn’t use the traditional white Apple-style charging surface, and instead uses a dark gray surface that blends in with the rest of the Cube’s body while including a stylized charging icon and ring of tags to provide an accurate visual representation of MagSafe magnets. I absolutely love the contrast with Apple’s bold white “MagSafe” surfaces, and I hope this is a sign of more unique designs for MagSafe certified products going forward.

In my testing with my phone charger, I found solid charging speeds on par with other MagSafe certified chargers. For some reason, none of the 15W external chargers I’ve tried can charge as fast as Apple’s own MagSafe charger, but they come reasonably close and are definitely faster than you can get with an unofficial MagSafe. Compatible charger “Apple up to 7.5 watts. 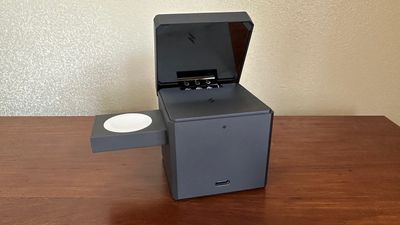 The Apple Watch charging disc on the Cube also features a clever design that can retract into the cube body, which is useful when traveling or when not needed. A quick push on the spring-loaded charger gets it in or out, though my unit tends to need extra pulling after deployed to ensure it’s fully extended.

As I mentioned above, the Apple Watch charger supports fast charging, which is really necessary for people like me who want to wear their Apple Watch as often as possible. Anker says it can charge an Apple Watch Series 7 or 8 from empty to 75% in just 45 minutes, and my experience has been consistent with those numbers. In fact, my testing showed that it charges my Apple Watch Ultra slightly faster than Apple’s own fast charging Apple Watch USB-C cable. 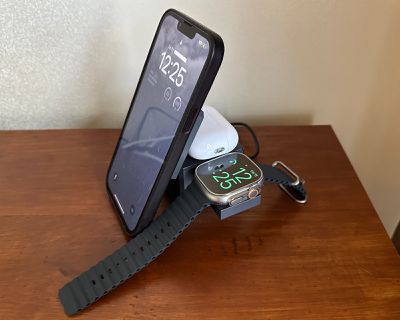 One potential downside to the Cube’s compact design and Apple Watch charger is if you’re a fan of bulky Apple Watch straps. I use the Ocean Band of the Apple Watch Ultra‌ as my daily band and have to be a little careful about how I adjust the watch to the charger to make sure the band doesn’t interfere with positioning as it dangles on the table or desk below. It’s certainly not a cut-off deal and it works well, but the thinner, more flexible bands are unlikely to be difficult.

Another consideration is that the Apple Watch’s charging surface is oriented horizontally, so it’s not particularly convenient to use with Nightstand mode on the Apple Watch compared to some other solutions with angled charging tablets. As a multi-device charger, you’ll likely also have an iPhone‌ sitting on a tilted MagSafe‌ charger that you can use to check the time during the night if necessary. 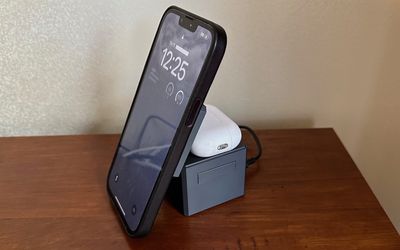 As for the rest of Anker’s Cube design, I like the uniform dark gray plastic that helps it blend into most environments, and the only visible branding is the Anker logo slightly embossed on the front in the same dark gray color, so it’s pretty subtle. The one thing I’m not a big fan of is that the hinge is a glossy, almost reflective material that easily shows fingerprints. The back side of the “MagSafe” charging surface is made of the same material, but is not very visible due to its location and the extreme angle of the charging surface.

The bottom of the cube has a rubber-like material that helps ensure it doesn’t slip or damage the desk or table it’s sitting on, and there’s a small white power LED indicator on the back of the cube. It turns on briefly when plugged in, only lights up while AirPods are charging, and its location means it doesn’t light up on you at night.

In addition to the Cube itself, Anker includes a basic 30W USB-C power adapter with foldable prongs, as well as a 1.5m (5ft) USB-C to USB-C cable that I found. Long enough for the many locations I’ve tested the cube. 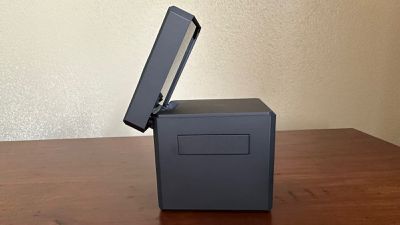 The Anker 3-in-1 Cube’s biggest drawback is probably its price, coming in at $149.95. This is in line with other officially approved premium 3-in-1 chargers like Belkin, but certainly some sticky shock to customers who are used to Anker’s premium quality but good value products. The Cube’s high price tag can be attributed to MagSafe fast charging support and the Apple Watch, as Anker needs to work directly with Apple to obtain higher-priced components and product certification.

The 3-in-1 cube with MagSafe® has surely proven popular with customers, and unfortunately it may be too late to order if you’re looking to give it as a holiday gift. Apple currently quotes a delivery estimate from December 13 to December 28 even with express shipping, while Anker itself says new orders won’t ship until at least Christmas and probably not until early January.

Note: Anker MacRumors are provided with a 3-in-1 Cube for the purpose of this review. No further compensation was received. MacRumors is an affiliate partner of Anker. When you click on a link and make a purchase, we may receive a small payment, which helps us keep the Site running.