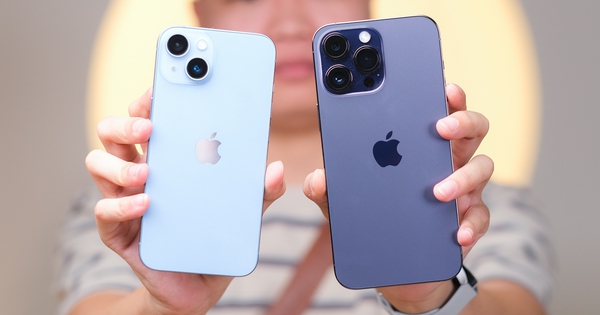 After half a month of falling into serious “scarcity”, on November 16, retail systems announced that they would continue to open and sell the iPhone 14 Pro Max with new supplies just added. This shipment is expected to cater to the large purchasing power of Vietnamese consumers during the year-end shopping season, especially on Black Friday at the end of November.

Quench the thirst of the iPhone 14 Pro Max

According to the records of retail systems, iPhone 14 Pro Max is the most popular iPhone model among Vietnamese users, accounting for 80 to 90% of sales since its opening on October 14 until now. Significant buying power means the Pro Max version is always in short supply, pushing the price of this model higher than Apple’s listed price, sometimes reaching the VND 40 million threshold on the “black market” for the 256GB color version.

Earlier in the iPhone deposit period, most retail systems announced that the percentage of customers who ordered the Pro Max version accounted for 80-90% of the total number of deposits, and purple was the dominant color. In contrast to the attraction of the Pro Max version, the Standard version and the Plus version have not caught the attention of Vietnamese users, always in stock but still a few buyers. A representative of one of the retail units said that the percentage of customers ordering the iPhone 14 and 14 Plus was very low, no more than 5%.

This new iPhone shipment is known to be the largest shipment that distributors have sent to retail systems since they opened for sale. This information was disclosed by Mr. Nguyen The Kha, Director of Mobile Communications Department FPT Shop and F.Studio by FPT. Prior to this, most of the new iPhone inventory had been refreshed by “flow down”, just enough to pay the deposit for customers who pre-ordered it.

With a large amount of goods being updated by the systems, the FPT system also expects enough deposits to be paid to customers and can continue to sell to customers who come to buy machines directly from the store.

There is no information about the next shipment yet

Although the retail systems all agree that this batch of goods will arrive in bulk, the new shipment will not be sufficient to serve the large purchasing power of the consumers. The representative of the FPT Shop system said that it is working hard with Apple to continue to prioritize merchandise to meet the large end-of-year and Lunar New Year shopping needs.

In the same opinion, CellphoneS also said that the new shipment only achieved the purchasing power of Vietnamese users in a short period of time.

A representative of a large supermarket chain also confirmed that there is no information about new shipments after this batch. If the shortage continues, retail systems sales and sales could be significantly affected during the holiday season later this year and early next year.

The lack of an iPhone “excites” the “black market”. iPhone speculators are constantly “collecting” goods, waiting for the iPhone price to increase to sell at a high price, which pushes up the general market price of iPhone to make a profit.

In addition, iPhone mobile products from other markets have been booming recently due to the scarcity of original products, most of which are a few million dong cheaper than VN/A products and are always in stock. However, users are advised not to choose items on the “black market” to avoid being scammed, and to buy models of unknown origin, without official invoices and without official warranty from Apple in Vietnam.